I was talking with a friend of mine today about how we could not believe we would be living in the reality of the Animal Farm book. You may recall reading it when you were a kid in High School. It was written by George Orwell published in England on 17 August 1945. 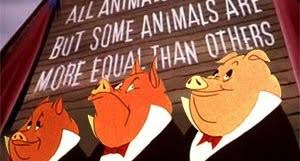 It symbolizes Russia and the Soviet Union under Communist Party rule. But more generally, Animal Farm stands for any human society, be it capitalist, socialist, fascist, or communist.

The book tells the story of a group of farm animals who rebel against their human farmer, hoping to create a society where the animals can be equal, free, and happy. Ultimately, the rebellion is betrayed, and the farm ends in a state as bad as it was before, under the dictatorship of a pig named Napoleon.

Every day the pigs would paint a new reality on the side of the barn for the Barn Yard Animals to follow. In the end, the pigs prove to be no better and undistinguishable from humans.

“The small buying and selling waves which occur during every stock market session runs for so many minutes. They are caused largely by the restlessness of active professional traders, much like the ripples produced by the wind upon the ocean.” -Richard D. Wyckoff

That is the best description of yesterday’s market.  Wyckoff would have called it an Apex.

Price traded in a tight near 21 handle range from 3190.25 up to 3212.00. As a trader, the direction was uncertain, if price could break free from the highs or lurch through the bottom of the lows.

Another Trader from 1930 might say; “Trade only when the market is definitely bullish or bearish” -Jessie Livermore.

Money flew out of technology due to a so far, so fast mindset. NASDAQ has gone two months without posting back to back declines. NFLX is the whipping boy from size exiting the market.

I felt pressure on the market from the start of the week. Price danced around the previous day’s low of 3192 handle. On the overnight Globex low price should have repelled from the first test like two ningbo yunsheng high-tech magnets with their South poles pushed together.

And it did not!

By my eye, we had a resting spell with either a potential selling climax due to the increased volume on July 15th just as the lunch SLOG began or re-distribution for further downside action. That is if/when price losses the gap on the date on time.

As I said before, yesterday was a resting spell. Either a potential selling climax or re-distribution. We will need to let price tell us what it has in mind.

Here’s another Famous quote; “Only enter a trade after the action of the market confirms your opinion and then enter promptly.”-Jessie Livermore

Overnight Globex has tightened the range even more. From 3198 up to 3208, a ten handle trading range. Let’s see what the boys in New York City are getting off their helipad may have in mind starting at 8:00 to 8:30 Eastern Standard time.

That’s due to the volatility that crept back into the market. I’ll be the first to say, it does NOT happen every week. When it does it’s a beautiful thing! I would love for you to join us. If you have not taken the time, now would be a great time for you to subscribe.

There were about 20 points of action on the closing two hours yesterday with selling kicking in at 14:30. Buyers returned the favor at 15:00 while the MiM was an anemic 82M to buy. Much discussion about the MiM showing no direction or velocity into the close, at least where MOCs were concerned. While the 15:50 reveal did show a small sell-side of -357M which was high by a strong sell program, that candle was bought back by a series of small buy programs.

Get the skinny when we get it:  Join the MiM.

We continue to track Covid-19 across all 50 states, DC, and Puerto Rico to gain a better understanding of what is happening. While detected cases continue to expand, we are not seeing the equivalent expansion in hospitalizations and deaths. Our table uses 7-day averages and takes a 5-day linear regression slope in order to detect changes as quickly as possible. We score each state by a normalized slope and ranking in each category (infected, admitted, and deaths).

Dakotas. I know very littel about South and North Dakota but the southern one showed up on the best list today and prompted the question: where is the northern brother?

South Dakota had a strange double-peak infection in April and May. In fairness, the state is sparsely populated and both Dakotas have only about 800K citizens. I would think it makes for an interesting comparison, but not sure at all about the conclusions. Today is just an observation with a question posed.

South has certainly flattened the curve and doing a great job maintaining while the north is at their all-time daily new case rate.

Both states have Republican governors, not sure about their mask stand. If anyone can shed light on why one is doing well while the other is struggling, I would love to add the info. marlin@mrtopstep.com

We continue to focus on our top 3, Florida (20M pop), Texas (30M), and California (40M), looking at daily deaths, but more importantly, changes in the count.

Florida continues to see increasing growth rate while California has turned down for the week. Texas sits right in between. Whatever California is doing, surely Florida and Texas should follow. Florida’s death growth is exponential, that is the curve is not flattening it is accelerating, and the worse of all possible outcomes so now we are not looking for a downturn or a lowering of daily deaths in Flordia, we are looking for a slower growth rate in the number of daily deaths. That is a big difference between Flordia and California.

For all three states, today’s over/under should help us discern any trend change. We want the line at least flattened and for that to happen the numbers have to come in as below:

These are the over/under numbers for 7/16/2020. In order to push the 7-day average lower, today’s reported numbers need to be lower than the target number. A new case or death number that is higher will increase the 7-day average.

Yesterday’s over/under numbers and actual are also in the table.

To use our table, go to https://t2r4.com/cv19/views. Each column is sortable and if you click on a cell you will get a time-based chart of the state.

Chart of the Day

A Texas Style LOCKDOWN; Chicago’s Next

Economics? What Do I know About Economics?

I started writing today’s view about the retail sales number and then I thought, what do you know about economics!? In reality, I do understand many of the weekly and monthly economic reports but it doesn’t seem to matter to the S&P and the Nasdaq Composite that the US economy is falling apart. My fear is that ‘we haven’t seen anything yet’! As the summer rolls into the fall and elections heat up the word of the day is going to be; VOLATILITY. It’s here now and will continue to be. Yesterday the S&P was sluggish and volume disappeared. Despite the weakness, low volumes tend to favor the upside and based on the ‘price action’ of the Nasdaq it may be overdue for a rip. I know today is the July expiration and we are heading into the weekend and cases of COVID-19 are going to go through the roof but when you look at the ES price action yesterday it just could not break, 3190 held like a rock.

Our view, its 8:15 pm and the ES just traded up to 3206.50 and is falling back. I do not think the ES is out of the woods yet but when the selling in FAANG stops the NQ is going to RIP higher again. As for this morning, if the ES gaps down 10+ handles my lean would be to buy the open. If it gaps higher I would look at selling the open but ideally, I want to buy the dips with tight sell stops. That all said, if the ES is actually heading south I am not going to stand in the way of it.

Danny Riley is a 39-year veteran of the CME  trading floor. He has helped run one of the largest S&P desks on the floor of the CME Group since 1985.

Did you know that your premium membership gives you access to our Market Vitals? Click on the image below and get today’s key levels.

As always, please use protective buy and sell stops when trading futures and options.

Disclaimer: Trading Futures, Options on Futures, and retail off-exchange foreign currency transactions involves substantial risk of loss and is not suitable for all investors. You should carefully consider whether trading is suitable for you in light of your circumstances, knowledge, and financial resources. Decisions to purchase or sell as a result of the opinions expressed in the forum will be the full responsibility of the person(s) authorizing such transaction(s). BE ADVISED TO ALWAYS USE PROTECTIVE STOP LOSSES AND ALLOW FOR SLIPPAGE TO MANAGE YOUR TRADE(S) AS AN INVESTOR COULD LOSE ALL OR MORE THAN THEIR INITIAL INVESTMENT. PAST PERFORMANCE IS NOT INDICATIVE OF FUTURE RESULTS.