1/30/2020: Dow 28859.44 | S&P 3283.66 | NASDAQ 9298.93 | Russell 2K 1648.22 | NYSE 13861.92 | Value Line Arith 6548.47
Fundamental: Mixed. Advance estimate for 2019-Q4 U.S. GDP was 2.1%. Full-year 2019 GDP was 2.3% compared to 2.9% in 2018. Growth has slowed and could still be slowing. Even though growth has slowed, employment remains solid with 145,000 net new jobs added in December and the unemployment rate is 3.5%. Analysts expect corporate earnings forecasts will improve in 2020, but upward revisions have been lacking as earnings season rolls along. The spread of China’s coronavirus globally is a concern as the potential impacts to growth remain uncertain.
Technical: Consolidating. After a steady rise from early-October through mid-January, DJIA, S&P 500 and NASDAQ appear to be taking a breather. All three indexes logged new all-time highs during the run. The rapid spread of the coronavirus may have triggered the pause and retreat, but key support at 50-day moving averages remains intact.
Monetary: 1.50-1.75%. Rates are still low and are likely to remain low. QE4 or repo market support is now expected to continue through at least April 2020. Based upon the manner in which the repo market suddenly needed support last September, it would not be surprising to see support last beyond April of this year. Fed balance sheet expansion has historically boosted the stock market and it will likely have a similar effect now.
Seasonal: Neutral. Even though February is right in the middle of the Best Six Months, its long-term track record, since 1950, is rather tepid. February ranks no better than sixth and has posted meager average gains except for the Russell 2000. In election years, February’s performance remains bland.
Psychological: Fading. According to Investor’s Intelligence Advisors Sentiment survey Bullish advisors are at 52.8%. Correction advisors are at 28.3% and Bearish advisors are 18.9%. New all-time highs, bullish yearend seasonality and the holiday season typically cause high levels of bullish sentiment from now until well into the New Year. Just one week ago, in mid-January, bulls were at a high of 59.4%. This easing of bullish sentiment is positive and not unexpected as the market pauses to access the impacts of the coronavirus, valuations, and earnings.
February Outlook: Any Market Pause Likely Short-Lived
February is notoriously the weak link in “Best Six Months” so we expect the big run the market has been on since mid-October to at least take a breather in February as it often does to consolidate January gains and the gains over the first half of the “Best Six Months.” The market is also digesting a copious and volatile news flow, still elevated valuations and some consolidating technical readings.
Since our October 11, 2019 “Best Six/Eight Months” buy signal DJIA is up 7.6%, S&P 500 has gained 10.6% and NASDAQ has tacked on an impressive 15.4%. The only thing that seems to have been able to rattle this bull market at all in 2020 has been the spread of China’s coronavirus and the quarantines and travel restrictions associated with it.
However, the market has proved to be resistant, suffering a mere 2.6% drop on the S&P 500 from the January 17 high to the low so far on Monday January 27. All the damage came over two days, creating the first Down Friday/Down Monday of 2020. We examined how epidemics have impacted the market on the blog and found that historically the market has not been greatly affected by these outbreaks.
In other news, stocks also appear to be immune to presidential impeachment trials and Brexit. This likely has much to do with Fed and the Election Cycle. The Fed is still printing lots of money and they are likely to continue to do so for some time. At the last FOMC meeting the said they had plans to continue adding liquidity to the banking repo market through April. This is basically QE4 and we suspect it the will continue well past April as banks continue to rely on the repo facility and have become accustomed to having it. An expanding Fed balance sheet is something that has been known to fuel bull markets.
In addition to this expanding Fed balance sheet the Trump administration appears to be engaging in some classic Election Year priming of the pump. Government spending has been increasing under President Trump and this massive deficit spending is running at a faster pace than last year. Federal spending for the first quarter of Fiscal 2020 ending December 2019 came in at $1.163 trillion up from $1.090 last year with a deficit for the quarter of $357 billion vs. $319 billion last year. Cleary the current administration is ramping up spending in its reelection year in typical incumbent fashion.
Finally, our flagship January Barometer indicator is on pace to be positive unless the S&P 500 is down more than 52.88 points (–1.6%) tomorrow on January 31. This bodes well for the market in 2020. When the January Barometer has been positive in Election Years the market has been up for the year 100% of the time for an average gain of 15.6% and gained 10.6% over the remaining 11 months.
We would also hit our January Indicator Trifecta, as the Santa Claus rally and First Five Days have already posted gains. The previous 31 occurrences of positive January Indicator Trifectas have been followed by full-year S&P 500 gains 28 times with average gains of 17.5% and gains over the next 11 months 27 times averaging 12.3%. This suggests that our base case and best case scenarios in our 2020 Annual Forecast from December 19, 2019 are on track.
Pulse of the Market
DJIA closed above the 29,000 milestone on January 15. Along the climb higher the Santa Claus Rally and the First Five Days indicator were also positive putting the market on course to complete the historically bullish January Trifecta. The march higher in January did encounter some bumps and dips, but DJIA has held and remained above its 50-day moving average (1) thus far. The global spread of China’s coronavirus is high on the list of concerns as its potential impact on growth and corporate earnings is unknown, but now that it has been officially declared an emergency by WHO, additional funding and a firmer, more aggressive response is likely. Due to the recent retreat by DJIA, both the faster and slower moving MACD indicators (2) are currently negative. 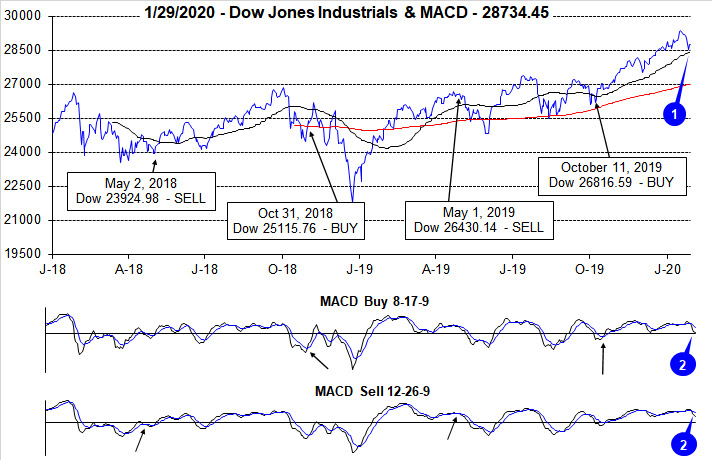 Earlier this week DJIA recorded its first Down Friday/Down Monday (DF/DM) of the year (3). Given the historical record of DF/DMs since 2000, it would be prudent to remember that the majority of past occurrences were followed by some weakness during the next 90 calendar days. However, if DJIA’s Monday close of 28535.80 holds and DJIA quickly recovers to 29000 and/or above, then the likelihood of a more damaging retreat in the near-term is diminished.
Looking back over the last 20 weeks, S&P 500 (4) has risen in fourteen weeks; NASDAQ (5) has advanced in fifteen weeks. S&P 500 worst weekly decline was a modest 1% last week and in late September. Even NASDAQ’s 2.2% decline in September was not all that damaging. Week after week of modest gains combined with only the occasional modest pullback is evidence of a resilient market with reasonable strong underpinnings.
Market breadth measured by NYSE Weekly Advancers and NYSE Weekly Decliners (6) has remained positive with Weekly Advancers outnumbering Weekly Decliners by respectable amounts in positive weeks. Weeks where Decliners outnumber Advancers and the major indexes post a modest advance would be a concern as this could be an early indication that participation is fading and only a handful of the largest stocks are carrying the market.
Weekly New Highs may have peaked at 631, two weeks ago (7) consistent with new all-time highs by DJIA, S&P 500 and NASDAQ. That was the largest number of New Weekly Highs since December 2016. Weekly New Lows have remained subdued but have been slowly creeping higher over the past four weeks. The market’s next move will determine where these levels go from here.
CBOE Weekly Put/Call Ratio sunk as low as 0.47 last week (8). This was the lowest reading since June 2014. In the week since, the ratio has snapped back to a neutral level. If the ratio were to retreat back below 0.50 again, it would be a concern as it could foreshadow another mild retreat at a minimum.
Click for larger graphic…