StockTradersAlmanac.com Alert - Mid-Month Update: Sinking Crude & Worst Four Months | MrTopStep.com
Skip to content
Historically, this week, the week after June options expirations has been a treacherous week. The week did start off on a positive note with solid across-the-board gains yesterday, but the major indices struggled today to hold those gains. Perhaps today’s weakness was just a touch of profit taking or it’s just the beginning of typical end-of-quarter restructuring. Persistent crude oil weakness was also cited for playing a role in today’s broad declines. 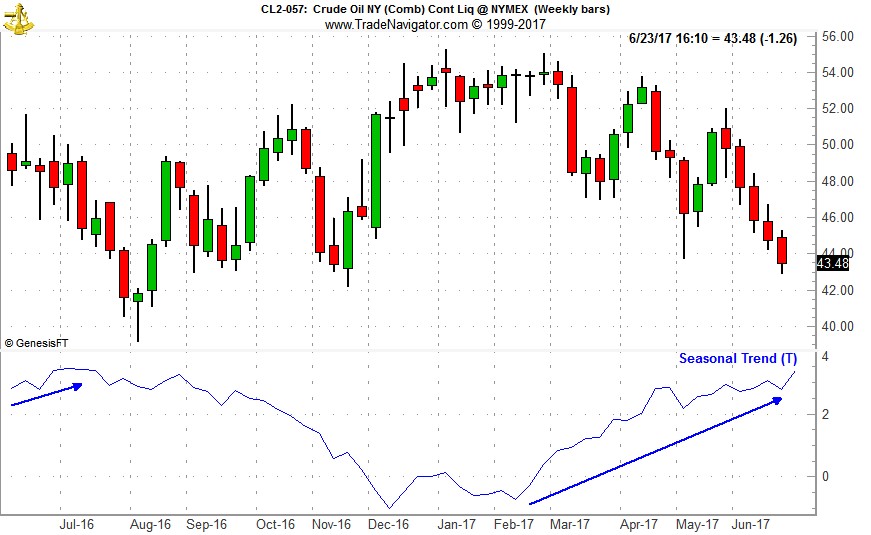 Typically at this time of the year crude oil would still be enjoying a rally off of its February lows as the North American summer driving season lifts demand and pulls prices higher until sometime in early July (lower pane of above chart highlighted by blue arrows). This has not been the situation this year. Crude oil rallied off a November low to an early January peak just above $55 per barrel. It hung out around that level through early-March before entering its current downtrend. Crude’s losses really accelerated at the start of this month and it traded under $43 per barrel earlier today. Using the standard 20% decline from peak as the rule, crude oil is now in a bear market. 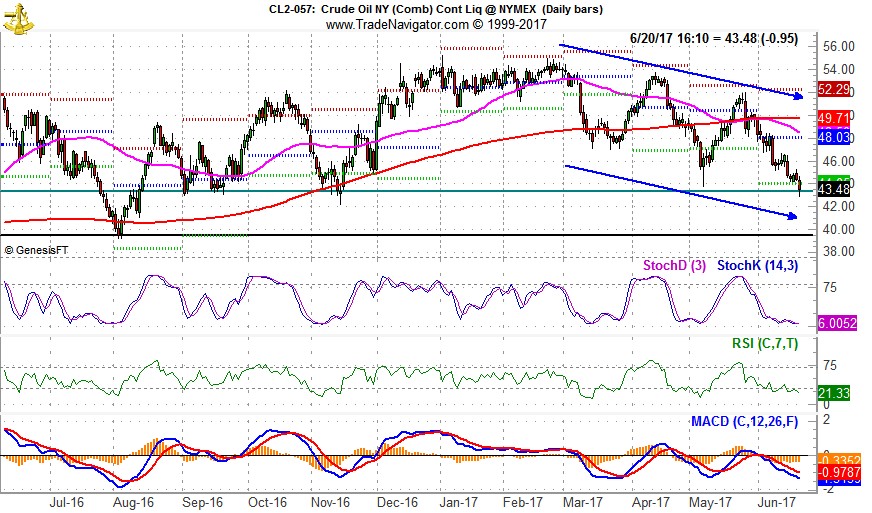 In the above chart, crude oil’s continuously-linked, non-adjusted, front month futures contract daily price is plotted. It is an ugly chart at this moment, with a series of lower lows and lower highs. It has plunged through projected monthly support (horizontal green dashed line), its 50-day moving average (solid magenta line) has plunged below its 200-day moving average (solid red line) tracing out a bearish death cross and Stochastic, relative strength and MACD indicators are all negative. Crude has not yet broken below its November closing low (solid green line) but could do so any day. The next level of support would be last August’s closing lows right around $39.50 (solid black line).
Crude oil supply is more than ample while demand, at least here in the U.S. appears to be flat at best to lower at worst. There are more alternative energy sources available today than any other time in the past and economies are becoming more efficient with crude’s use, but persistent price weakness could be a warning sign that the global economy is not as strong as it appears. The Atlanta Fed’s GDPNow model is also showing signs of growth cooling as it now predicts Q2 GDP at 2.9%, down from 3.2% on June 14 and 4.0% on June 1. Slipping Q2 growth expectations could lead to a similar effect on Q2 corporate earnings expectations which in turn could lead to a choppy market in Q3.
Worst Four Months Begin in July
When considering the long-term record (since 1950 for DJIA and S&P 500 and 1971 for NASDAQ), July through October are generally the “Worst Four Months” of the year. In recent years, July and October have been improving while August and September are heading in the opposite direction and now frequently account for the bulk of any market damage. As you can see in the following table, the “Worst Four Months” have been, on average, positive overall since 1950 and are also positive in post-election years over the same time period. However, the average gains are rather paltry considering the fact it is a four-month period and there have also been some rather nasty declines over the years. It is the lack of gains and the susceptibility to significant declines that justifies a cautious, defensive posture in portfolios and even outright avoidance worth considering. 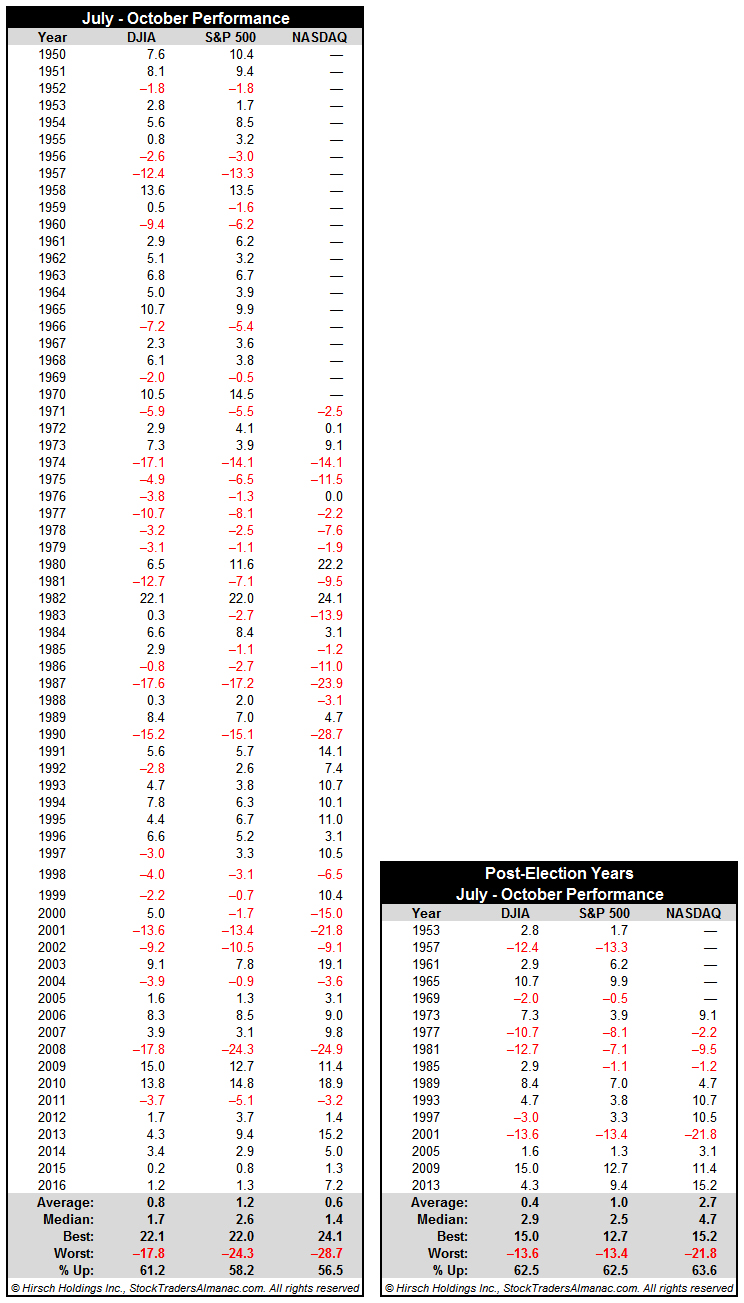 This next chart better illustrates how DJIA, S&P 500 and NASDAQ have historically performed during the “Worst Four Months” in all years and post-election (PE) years. In all years, the first half of July accounts for virtually all of the markets gains. After this initial jump higher to begin Q3, DJIA, S&P 500 and NASDAQ have all flat-lined, slipping slightly lower by the end of October. Post-election years exhibit a similar pattern, but with full-month July delivering all the gains followed by a more pronounced pullback. 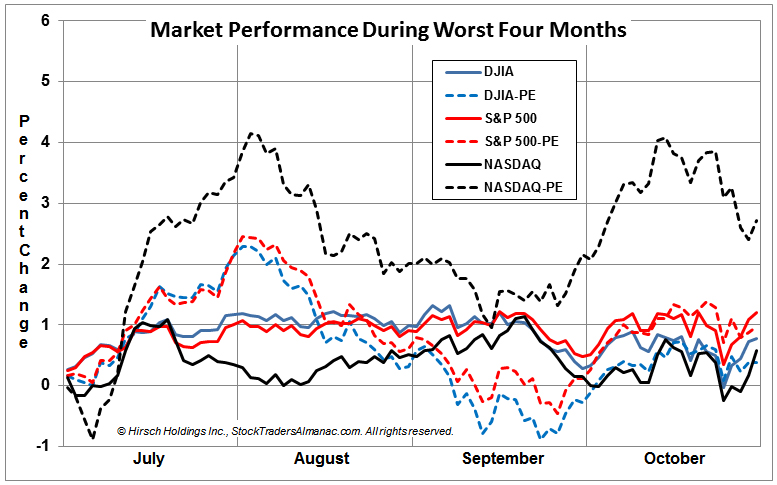 NASDAQ’s mid-year rally does appear to be still setting up. Further downside is likely this week followed by a brief beginning of Q3 rally after which the market is looking increasingly susceptible to a more meaningful pullback. With all the confusing cross-current geopolitical goings on, stretched valuations, technical topping patterns, seasonal weakness, fading bullish sentiment, a tightening Fed and a new administration still struggling to advance its policy objectives, the “Worst Four Months” could easily live up to their name.